At Hearne Hardwoods This Weekend 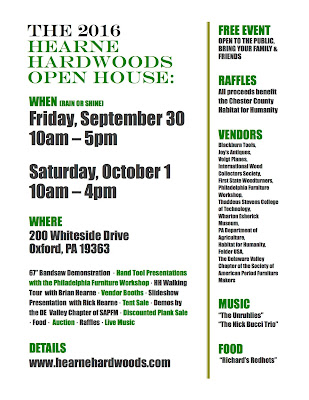 This Friday, 9/30, and Saturday, 10/1, I'll be demonstrating at the Hearne Hardwoods open house in Oxford, PA. There will be a a number of great demonstrators in attendance; In particular, I'm looking forward to seeing Isaac Smith of Blackburn tools. If you are in the area, please come by, say hi, and try some planes. I'll have my usual assortment of smoothers, jacks, and try planes. Hope to see you there! 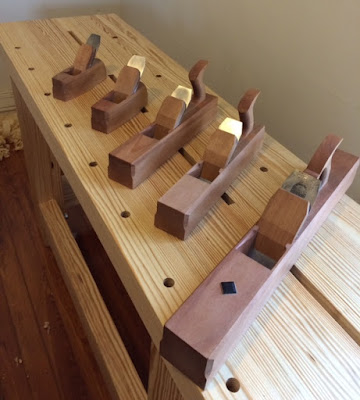 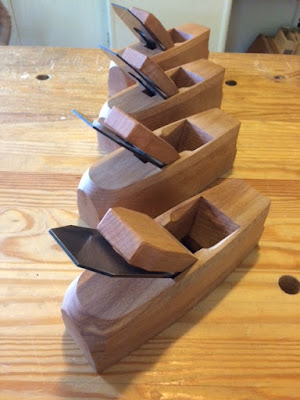 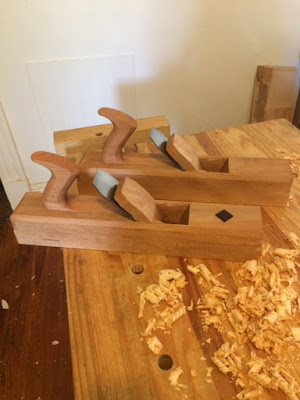 Posted by Steve Voigt at 9:37 AM No comments:


In parts I and II of this series, I focused on how woodworkers and writers viewed the double iron from the mid-18th century to the mid-20th. Here in Return of the Jedi part III,  I'll look at how this understanding evolved--twice--in more recent times. Let's start with an interesting passage from The Joiner and Cabinetmaker, a fantastic book originally published in 1839, then republished in 2009 by Lost Art Press, with commentary by Joel Moskowitz and considerable new material by Christopher Schwarz. Here is the original text:

In Mahogany…the workman often finds the grain running one way in one part of the board, and the other way in another part, so that he cannot plane both smooth. To remedy this inconvenience, the cabinet-maker's planes are furnished with a double iron; that is, an iron with a flat dull edge is screwed on the face of the cutting iron, so as to prevent the shavings chipping up against the grain. And the more cross-grained the wood is, the closer does the cabinet-maker bring down the dull iron towards the edge of the sharp one, and the finer are his shavings in consequence. The joiner's trying-plane and smoothing-plane, if not his jack also, are likewise furnished with these double irons, to be ready to use with hard and cross-grained woods. But when he is planing straight-grained deal [pine], he keeps the dull iron at a good distance, perhaps an eighth of an inch from the cutting edge…

If you've read parts I and II of this series, you will find the above passage completely unremarkable. Like virtually every other 19th century writer on the subject, our author describes the double iron as the normal remedy against tearout in difficult or reversing grain. The only unusual part of the text is the use of the term "dull iron"; however, recall from part II that Holtzapffel described the cap iron as "moderately sharp," so perhaps it was common to refer to the cap iron as less sharp than the cutting iron.

No, the interesting part is not the original text, but rather the commentary that Joel Moskowitz adds:

Clark and Williams, the planemakers, have pretty much conclusively shown that the best of the smoothing planes from the late 18th century, a golden age of hand cabinetry, were single irons with a high pitch. Their point is that a fine mouth and a high angle are more important for planing difficult wood than is a double iron. Larry Williams also said that during the 19th century, plane quality deteriorated, and that the double iron at a lower bed angle was adequate for most of the market (joiners), and this squeezed out the dedicated cabinetmaker's tools. Here we see a contemporary reference that suggests otherwise, but the reference cannot be taken at face value (emphases mine).

The comment that the reference "cannot be taken at face value" is extraordinary, considering that virtually every other period reference makes the exact same claims. But Joel is one of the most knowledgeable experts in hand tool woodworking, and I quote him not to poke fun, but rather to illustrate what had become the common wisdom about the double iron in the late 20th/ early 21st century. At that time, a narrative had emerged, and that narrative was spread and reinforced by teachers, writers, boutique planemakers, and large planemaking companies. In a nutshell, it went like this: Cap irons don't control tearout. They serve only to stiffen the blade, and they were more a convenience to manufacturers than an aid to woodworkers. If you want to plane tearout-free surfaces, you need either a high (above 45°) cutting angle, a tight mouth, or both.

This narrative was extremely influential. In addition to Clark and Williams (now Old Street tool), nearly every other boutique planemaker produced high-angle, tight-mouthed single iron planes. The big planemaking companies began to emphasize bevel-up planes (which can use high cutting angles and don't have cap irons) and high-angle frogs (which allowed users of bevel-down planes to have 50° or 55° degree cutting angles). Woodworking writers extolled the virtues of these newer options, and so common-pitch bevel-down planes like the venerable Stanley/Bailey pattern, or the common double-iron woodie, came to be seen as inferior: suitable for rough work and carpentry, but not fine woodworking. Which is quite ironic: you may remember that back in part II of this series, I quoted David Denning, who wrote in 1891 that while planes "are made with both double and single irons, it should be said that the latter, though cheaper, are not suitable for cabinet working."

At this point, I need to issue a couple of disclaimers. First, I believed this narrative as much as anyone else. I was completely convinced. Hindsight is 20-20 and Monday morning quarterbacks always win, so I can't criticize folks who doubted the double iron without criticizing myself. Second, the proponents of high angles and tight mouths weren't wrong about the effectiveness of those methods: they definitely work. The only error was the claim that double irons don't work.

Today, the narrative I've been describing still has plenty of proponents. But starting around 2012, a counter-narrative began to emerge and gather critical mass. And the counter-narrative was simple: The old guys were right. All those writers from the 18th and 19th centuries were telling the truth: cap irons really do control tearout more effectively than any other method. Cap irons fell out of favor because it's hard to explain in words, or even in photographs, how to set the cap iron close enough to control tearout. It's hard to teach yourself how to use the cap iron. And so there was a collective forgetting of how to use the cap iron.

What changed? The catalyst was in 2012, when Bill Tindall obtained permission to use an English-subtitled version of the Kato/Kawai video, with Mia Iwasaki providing the translation and Wilbur Pan hosted the video on his blog. The video shows, in crystal clear, slow motion, magnified images, the tremendous effect a cap iron can have. The video had actually been available for some time, but having the subtitles made it accessible to a wider audience. Bill publicized the video on the Wood Central hand tool forum, where an older gentleman, Warren Mickley, had insisted for years that double irons were the best remedy against tearout. Two younger woodworkers, David Weaver and Kees van der Heiden, took up Warren's challenge and taught themselves to use the double iron, much as it had been described in all the old references. Kees published two videos, and David published an article, describing the technique in a way that was accessible to modern readers. You can find the videos and article in the links of interest page on my website; they remain some of the best, clearest demonstrations of how to use the cap iron. Later, Kees and Wilbur would publish an article in Popular Woodworking magazine, and better-known woodworkers like Chris Schwarz and Richard Maguire would help knowledge of the cap iron reach a wider audience. Today many woodworkers, probably thousands, have discovered how the double iron can be an incredibly effective remedy against tearout.

And that, in a nutshell, is the story (so far) of the double iron. I'll close by referring back to Holtzapffel, whom I quoted in part II. In 1843, Holtzapffel described the use of the double iron in great detail, but he also discussed how high angles, tight mouths, and even bevel-up mitre planes can all help to mitigate tearout. All these approaches work. I happen to believe that the double iron is, as Peter Nicholson wrote, the "most complete remedy" for dealing with difficult grain, but that, dear reader, is for you to decide.