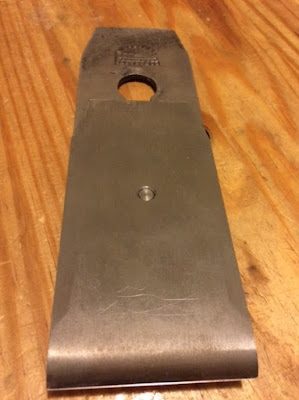 At the Lie-Nielsen Hand Tool Event in Covington last weekend, I was asked the same question over and over: "Aren't wooden planes normally single-iron planes?"

Well, yes and no.

Among contemporary, custom planemakers, I am the odd man out: I make double-iron planes, and virtually everyone else makes single iron planes. But 200 years ago, it was a different story. Double irons in the late 18th and early 19th centuries were so successful and popular with woodworkers that they drove single irons into relative obscurity.

In the 20th century, there was a gradual forgetting of the original purpose and function of the double iron, and double-iron planes came to be seen as cheap, mass-market planes, not as capable or as suited to fine work as single iron planes with thick irons, steep beds, and narrow mouths.

Fortunately, the early 21st century has seen a rediscovery and revival  of the double iron. Many woodworkers have discovered that with proper use of the double iron, a flea market Stanley or similar plane can perform on par with the finest custom planes, no modifications required.

In the remainder of this post, I'm going to explore the early history of the double iron, a subject many woodworkers are not acquainted with. Later posts will look at how the double iron fell from favor, and its recent resurgence. Buckle up; this is not a quick and easy read.

The earliest documented reference to the double iron is in an advertisment placed in the Pennsylvania Chronicle, March 2-9, 1767, by Samuel Carruthers. 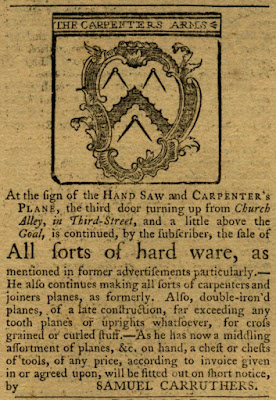 Here's a modern translation of the key sentence: "Also, double-iron planes, of recent construction, far exceeding any toothing planes or scrapers whatsoever, for cross-grained or curly lumber." In effect, Carruthers is claiming in 1767 that the double iron is the best solution for preventing tearout in difficult grain.

It's tempting to dismiss Carruthers's claim; after all, it was an ad! Fortunately, there are more impartial sources. In the Manuel du Tourneur (1792, 25 years after Carruthers), Salivet writes:

Finally, the double iron plane, its invention not very old, and apparently comes from the Germans, is none other than a tool in which two irons are put together back to back, but this double iron is bedded at a regular angle. The bottom iron, being very inclined takes a lot of the wood, like all planes and jointers, but in this mode it would tear out a lot if the shavings were to enter the throat at that angle. The bevel of the top iron, lifts the shaving and forces it from the inclination at which it was started. But the two irons must not be even; the bottom one should be a little bit ahead. The less the difference, the less tearout produced, to the point where one can plane oak branches, even almost green ones; this is the most difficult test that can be done, as nothing planes as badly as “log” wood.

Salivet's description is important for a couple reasons. First, it describes how the double iron works: the cutting (or "bottom") iron would cause tearout, but the top iron (what we would call the "cap iron" or "chipbreaker") "lifts the shaving and forces it from the inclination at which it was started." In other words, it breaks the shaving at a more severe angle, hence the name "chipbreaker."

A third source, and the most important one for me, comes from Peter Nicholson's The Mechanic's Companion. Nicholson was an amazing fellow. He came from humble origins and served a traditional apprenticeship as a cabinetmaker, but he later became an accomplished mathematician, architect, author, and teacher, all with virtually no formal training. Like Roubo, he was an intellectual who never forgot his roots as a working tradesman.

The Mechanic's Companion has a publication date of 1831, but that is misleading. The book is a reprint of Mechanical Exercises, written in 1812, and reflects Nicholson's earlier experience as an apprentice and cabinetmaker. By 1792, he had already moved on from cabinetmaking to writing and teaching, so I am pretty certain the book primarily reflects his experiences in the 1780s, only twenty years or so after the Carruthers advertisment.

To prevent the iron from tearing the wood to cross-grained stuff, a cover is used with a reversed basil, and fastened by means of a screw.

Remember, "stuff" is wood, and "basil" means bevel, so Nicholson is just saying that a chipbreaker will prevent tearout in wood with cranky grain. He continues:

In the first sentence, Nicholson is simply saying that the front of the chipbreaker should be rounded, as in the photo at the top of this post, and not flat, the way a cutting iron's bevel is (and the way many modern "improved" chipbreakers are--a point I'll return to in a future post).

The rest of the passage is the Holy Grail. The distance between the cutting edge of the iron, and the edge of the cover, depends altogether on the nature of the stuff. In other words, the more difficult the grain is, the closer you need to set the chipbreaker to the edge. There's no fixed distance, e.g. .004" or whatever; it depends on the wood. If there is tearout, move the chipbreaker. That's all you need to know.

In the glossary of The Mechanic's Companion, Nicholson adds one more note on the double iron:

The double iron planes now in use, are a most complete remedy against cross-grained and curling stuff; the plane will nearly work as smooth against the grain as with it.

In the 20th century, it became common to view the chipbreaker as an unnecessary appendage, something that served merely to stiffen the cutter and prevent chatter. What the above sources show is that 18th century woodworkers emphatically did not see it that way. Rather, they saw the chipbreaker as a revolutionary technology that was more effective in combating tearout than any other method. As a result, double iron planes displaced single irons in the late 18th century almost as ruthlessly as the PC displaced the typewriter in the 20th.

In the next post, I'll look at how the understanding of the double iron changed over the 19th and 20th centuries.
Posted by Steve Voigt at 7:58 PM 14 comments: 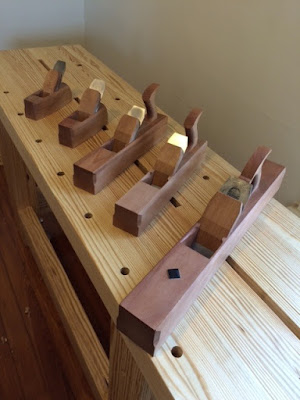 This weekend, I'll be demonstrating at the Lie Nielsen Hand Tool event in Covington, KY. Chris Schwarz's Lost Art Press will be there, along with many other great toolmakers (Raney Nelson, Conrad Sauer, and Caleb James, to name just a few). If you are coming to the show, stop by, say hi, and make some shavings!
Posted by Steve Voigt at 10:29 AM No comments:

What I've Been Up To 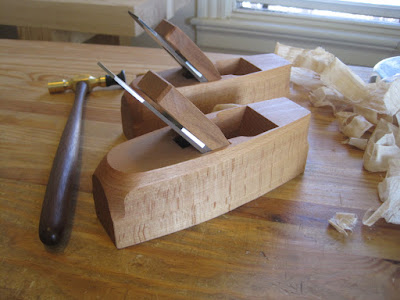 Well, it has been a long time since I've blogged. For anyone who's wondering where I've gone, I have a one-word answer: Instagram. Just as Video Killed the Radio Star, Instagram has been killing blogs right and left.

OK, perhaps I exaggerate just a bit. But there's no doubt that it is a lot easier to snap a quick picture and post it to Instagram with a caption, than it is to write a lengthy blog post. Which is too bad, because there's definitely a place for the longer-form, in-depth treatment that a blog can provide. And after I get past the next couple weeks of craziness, I'll try to crank out some more posts that I've been mulling over.

In the meantime, if you're interested in seeing the stuff I've posted on Instagram, just click on the "view on Instagram" badge in the upper-right corner of this page. Be sure to read the comments for some great conversations with a number of the leading planemakers of today, such as Caleb James, Oliver Sparks, Dan Schwank, Larry Williams, and more.

Meanwhile, here are some snapshots of what I've been up to.

I renovated my drill press: 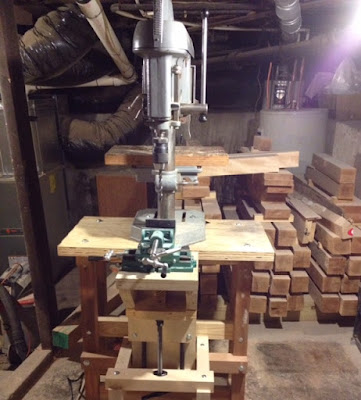 Then I drove to Indiana and packed the car full of quartersawn beech. 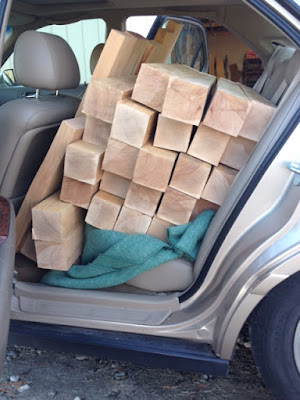 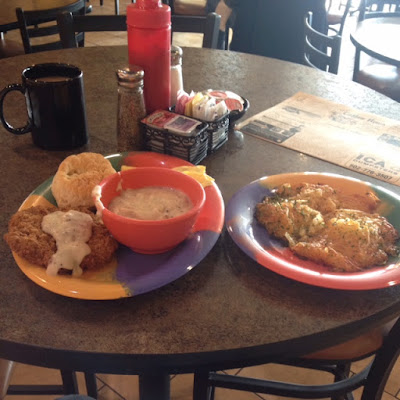 I made some smoothing planes: 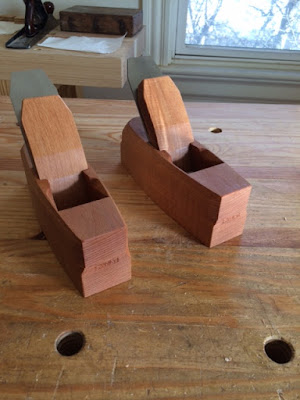 And I'm finishing up some jack planes. Here are 3 mortises I chiseled out in one day. A recipe for sore muscles. 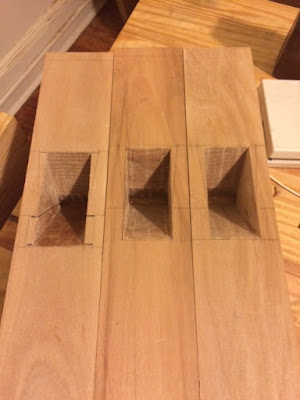