My chair project has been languishing, but I'm getting back to it this summer. This week, I started bending the crest rails. The first thing was to make some improvements to the steam box I built last summer. Originally, steam was supplied by a single tea kettle, powered by a camping stove. This was under-powered and a little unsafe, so I upgraded to two electric kettles, one from a yard sale, the other from ebay, total cost about $30. 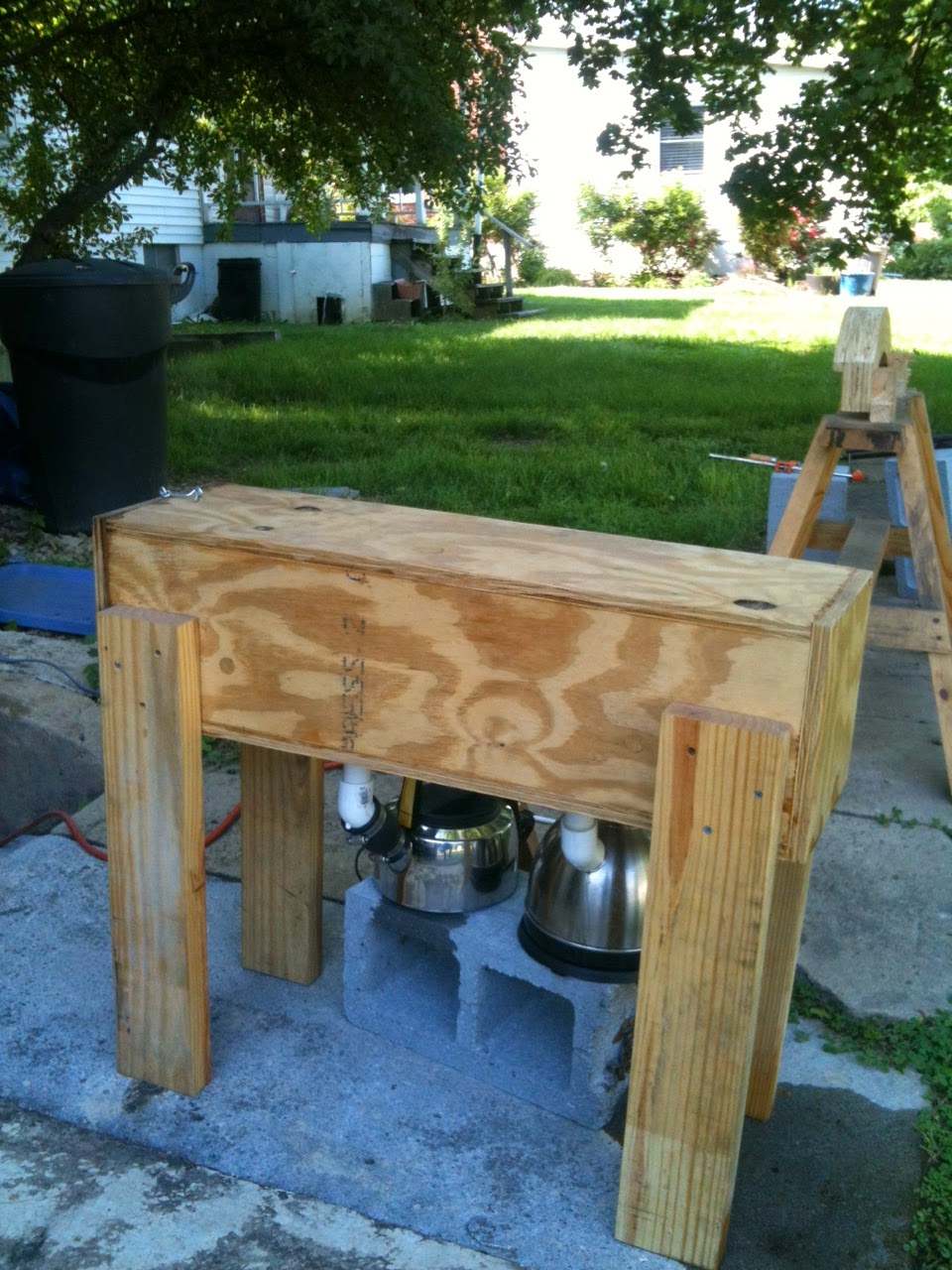 Here's a closeup of the steam source. Another key to improving performance was to shorten the plumbing as much as possible. That's the reason for the cinder block--to get the kettles closer to the bottom of the box. 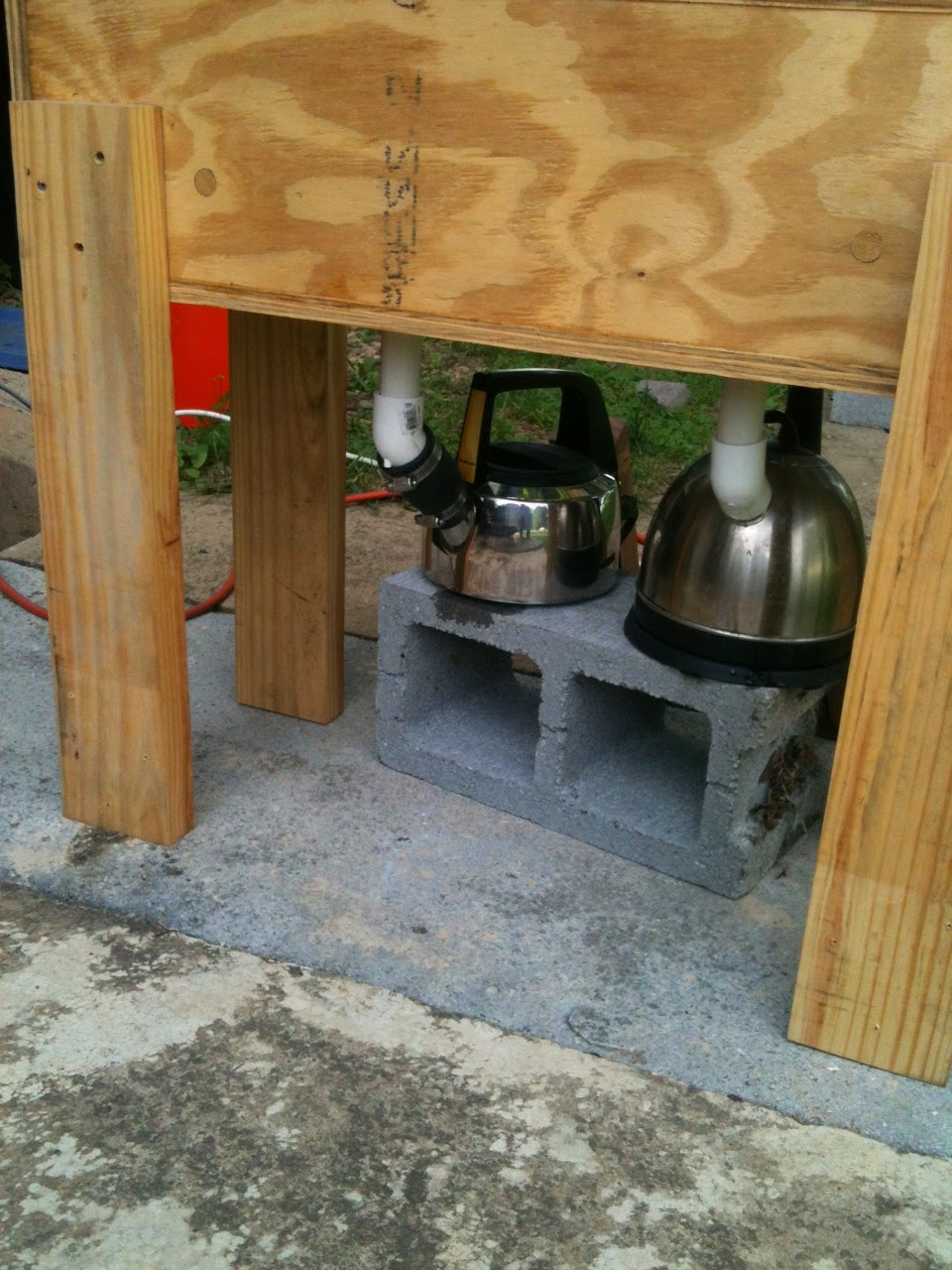 With two heat sources, the box works much better. Thanks to Peter Galbert's blog for the idea!

The crest rails were split last summer from the white oak log I bought, and have been drying slowly in my damp basement. They look pretty ratty: 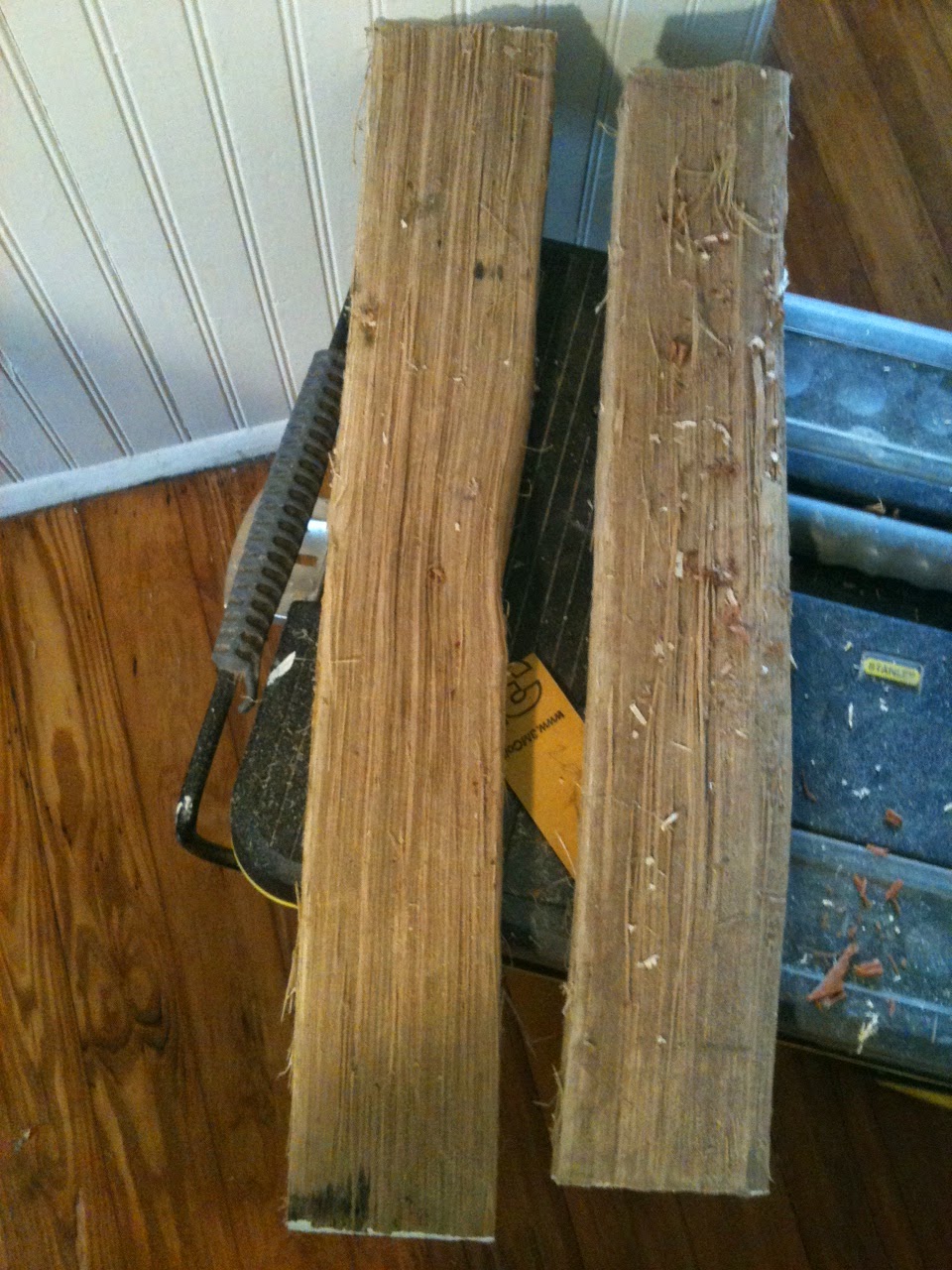 But they clean up nicely with a bit of drawknifing and handplaning. This one has a beautiful large ray on the right side. 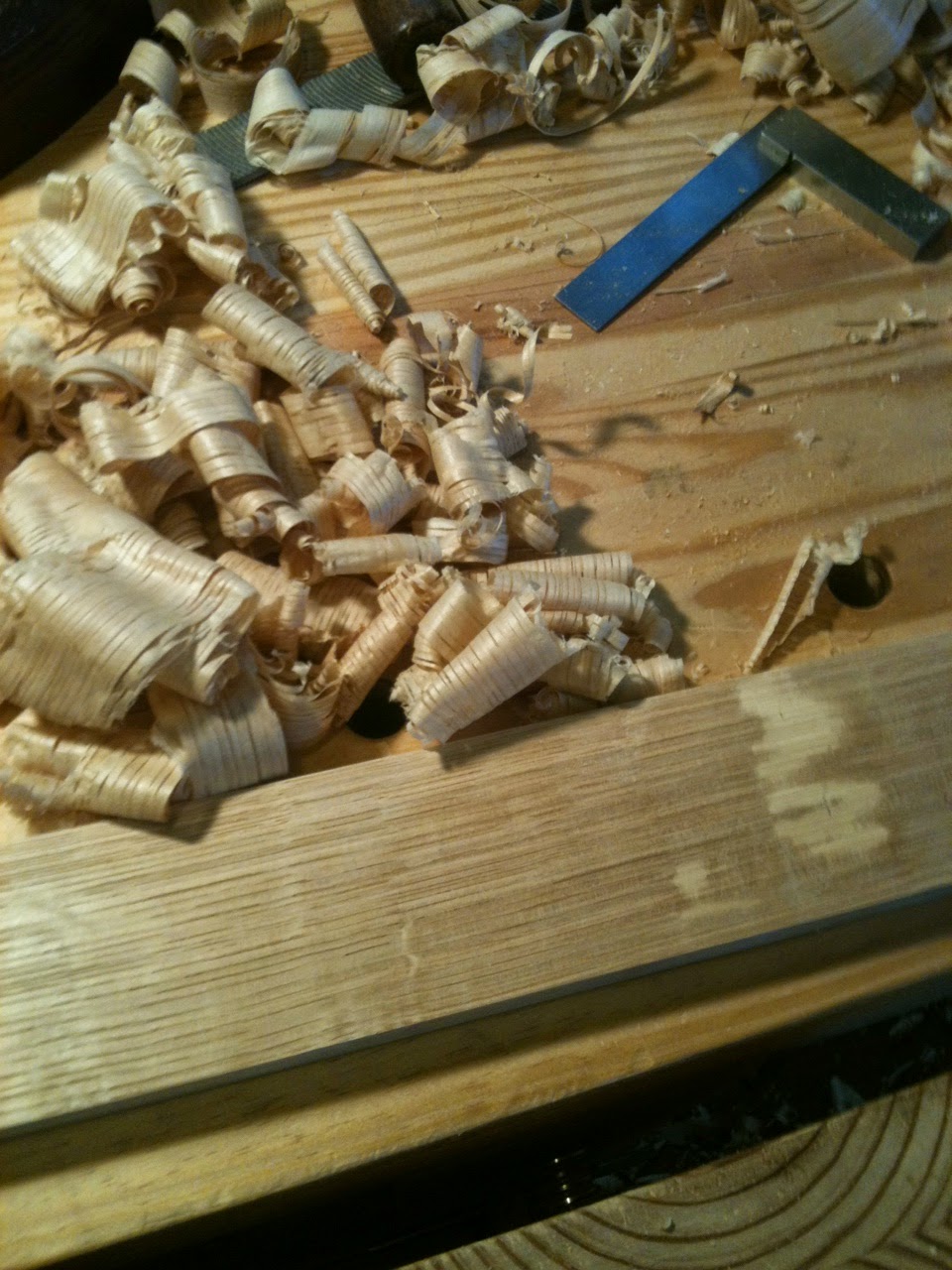 After steaming the rail for about an hour, I clamp it to a plywood form and let it set for several days. It looks all dark and stained with black splotches after steaming, but that will come out with a bit of cleanup. 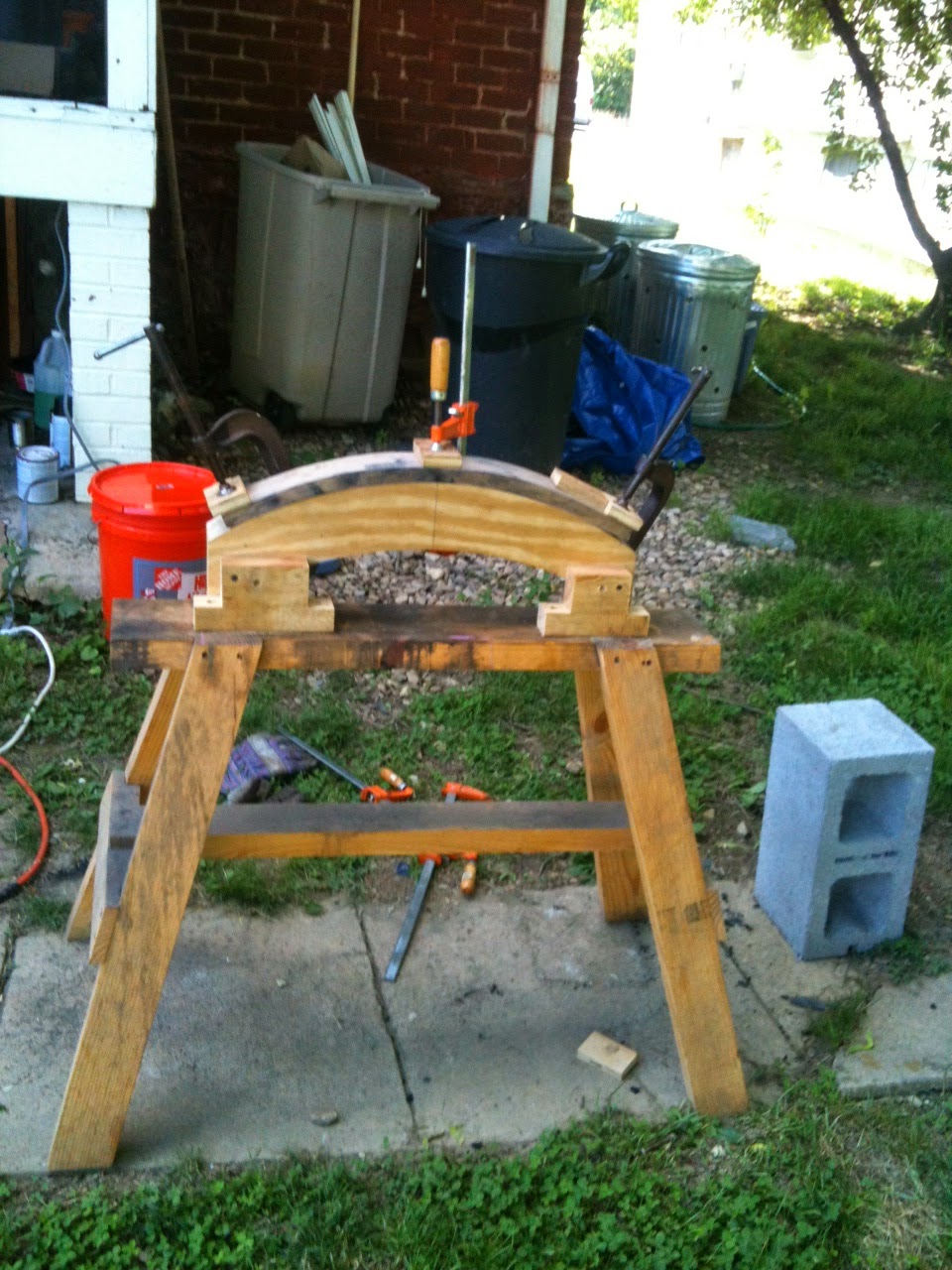 It's been rainy here, which has hampered the steaming somewhat. Once I get the rest of the rails bent, I can move on to the seats.

While normal people were barbecuing hot dogs and hamburgers on Memorial day, I was barbecuing something different… 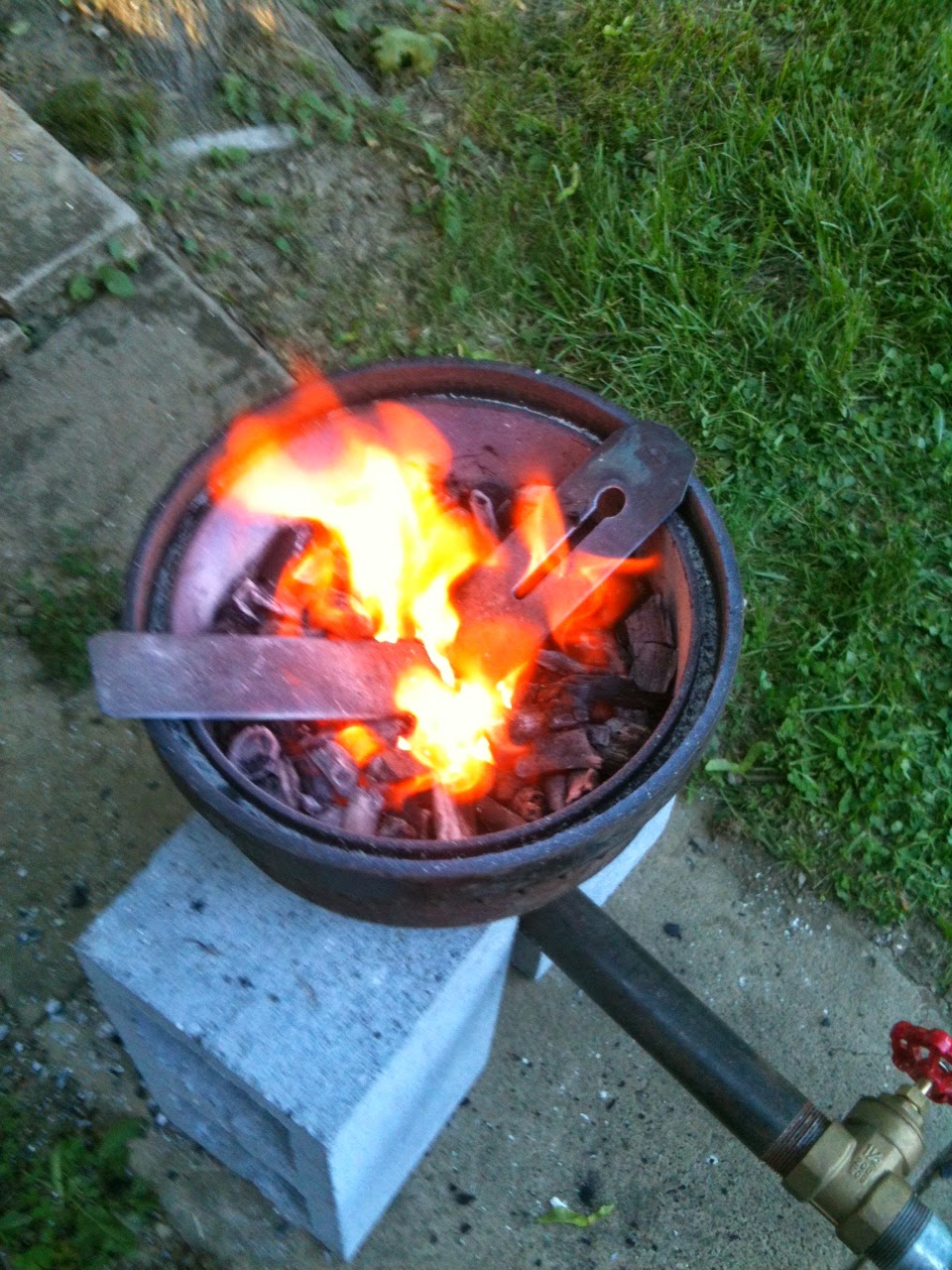 Plane irons!
As you can see, I finished assembling my charcoal forge. 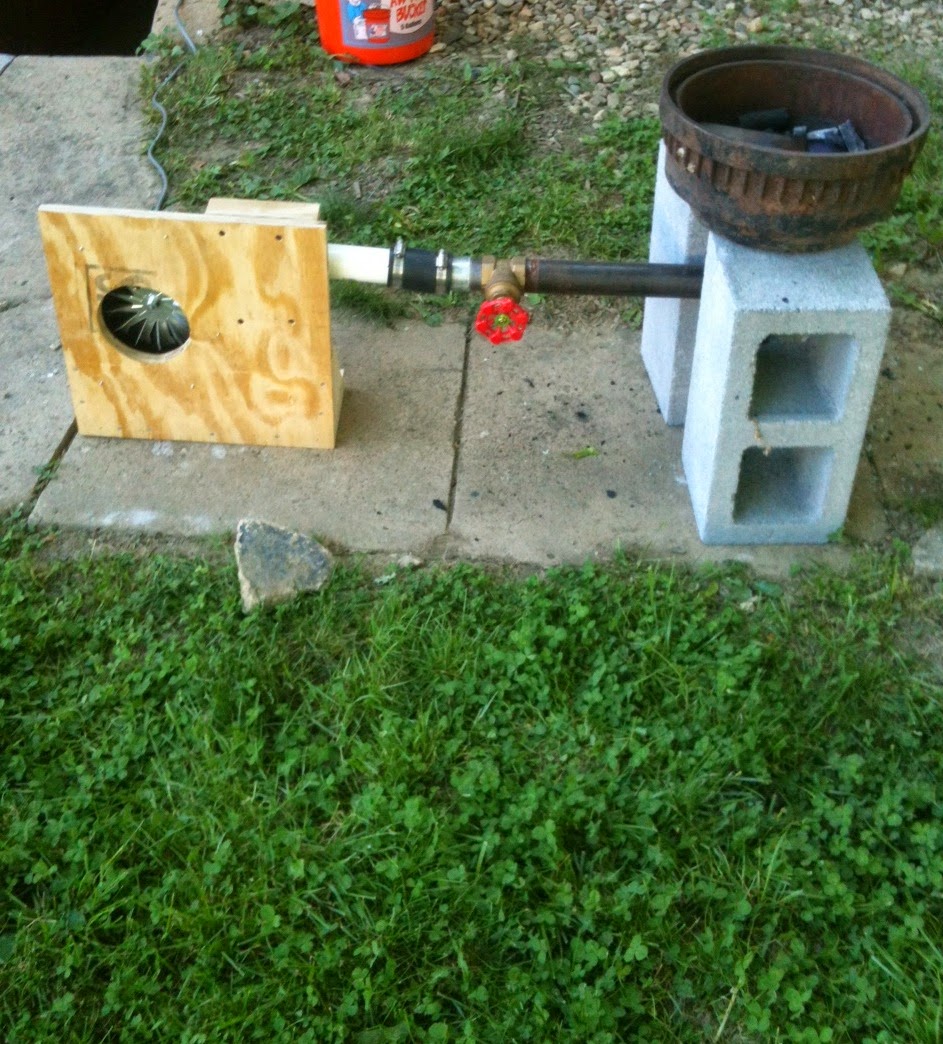 The construction is pretty simple. The firepot is a truck brake drum.  A floor flange is bolted to the bottom of the drum. Not shown is a tee fitting; there's a 4" nipple below the tee, with a cap over it, to collect ash. Then there's a 12" nipple, which ends in the fancy looking thing with the red handle. That's a gate valve, which was twenty-something dollars, but worth every penny. The valve connects to a piece of PVC, which pulls airflow from the fan. 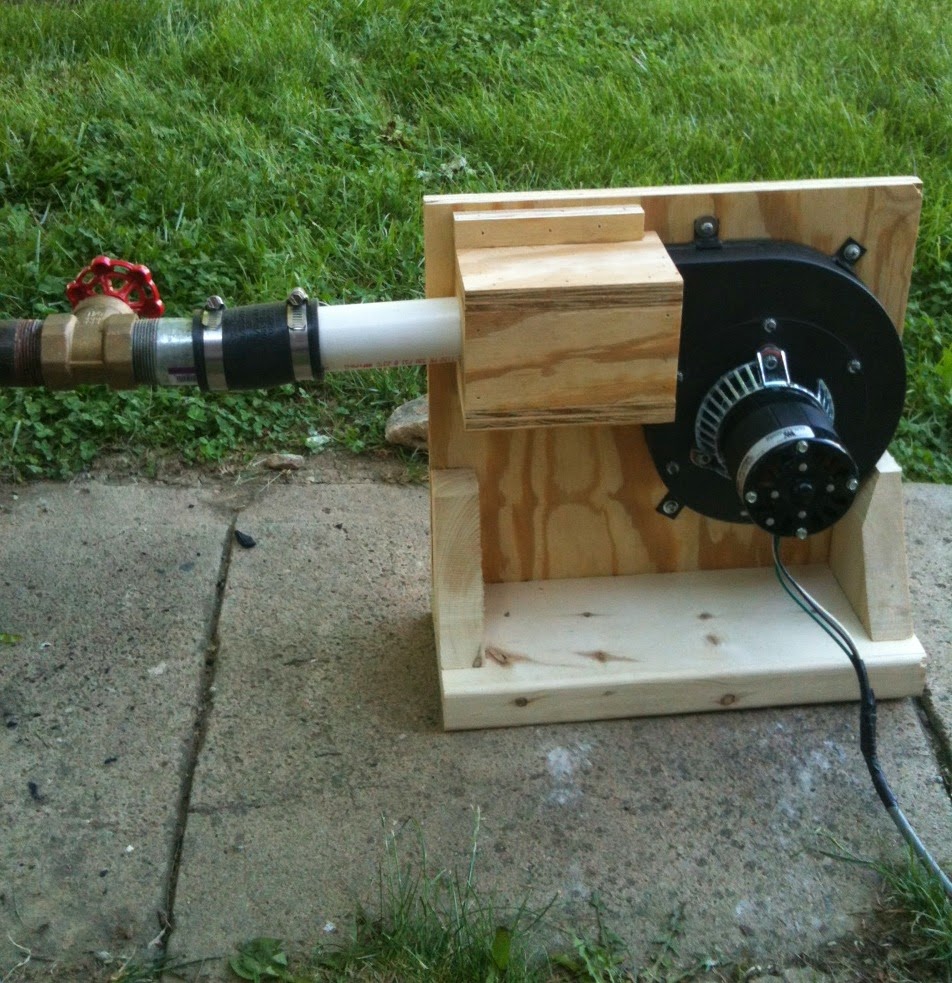 The fan is a wood stove fan that I got from Surplus Center for about $40, shipping included. The frame for the fan is just plywood and construction lumber, nothing fancy.

The forge works really well. I haven't yet been able to get it up to welding heat, which is around 2000°, but forging/hardening/annealing heat, typically 1400°-1500°, was no problem. But I need practice. My first effort was moderately successful. I tried to harden a plane iron and a chisel. The chisel turned out well, but the plane iron, not so much. This is to be expected; as Ron Hock pointed out to me, if it were easy, everyone would do it.
Posted by Steve Voigt at 6:18 PM No comments: