Sculpting the Heel of a Coffin Smoother

One of the most enjoyable parts of making a coffin smoother is shaping the heel. I favor the design popularized by Old Street Tool (formerly Clark & Williams), a design that is modeled on early 19th century examples. Other traditional planemakers, such as Caleb James, also use this form. The combination of sculptural curves and hard lines is both attractive and functional. A lot of modern, Krenov-style wooden planes have heels that look like the back of race cars, with no hard edges. It's an attractive look, and it's probably quick and easy to shape on a belt sander, but edges serve an important purpose--they orient the hand and prevent slipping.

So here's a little bit about how I shape the heel. I'm not sure if this is how other folks do it, but this way works well for me.

The first step is to make the stopped chamfers and gouge cuts, exactly as I make them on the front of the plane. Even though 90% of the chamfers are obliterated in the next step, I still have to make them in order to lay things out properly.

The next, and probably most important step, is to lay out the four arcs. There is one on the heel, which is set about 3/8" below the top of the plane, so that the top of the arc is level with the long chamfers. 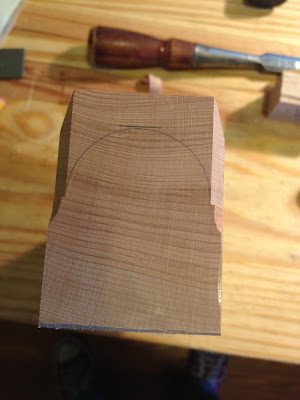 There is one on the top of the plane, also offset about 3/8". 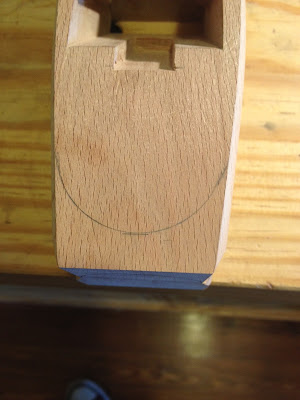 And there is one on each side, connecting the long and stopped chamfers. 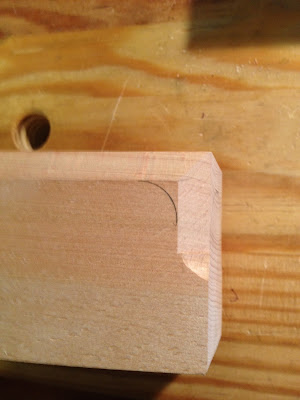 Then I go at it with chisel and mallet. A lot of people might be tempted to reach for a rasp at this point, but a chisel is far faster, and your rasps will last longer if you don't do unnecessary hogging with them. I knock off big slices at about a 45° angle, then pare more carefully to follow the curve. I try stay about 1/8" or a little less from the layout lines. When I'm done, it's ugly but about 90% of the material has been removed. 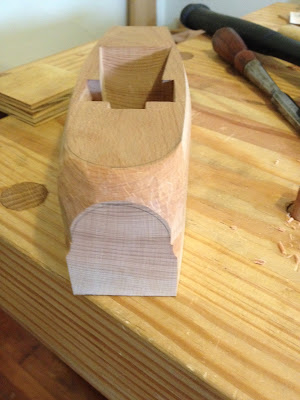 Next, I use a coarse rasp to remove the facets and get to within a 1/16" of the layout lines. One of these days, I am going to leave a plane in this state. I really like the rough, visceral texture. 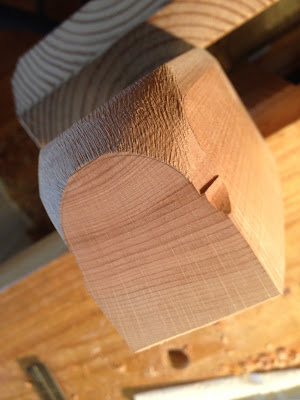 After the coarse rasp, I move to my finest rasp, which is sort of a medium-fine rasp, nothing special. This removes the deep scratches and gets me within about 1/64" of the layout lines. 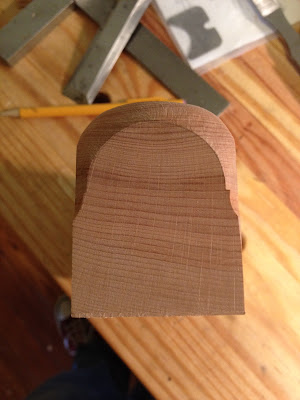 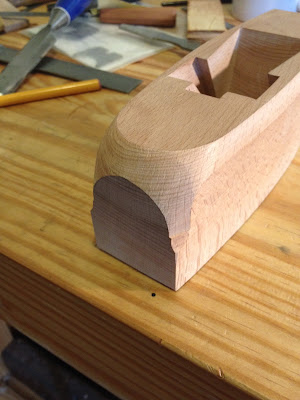 At this point, the ideal tool would be a super fine-grained rasp from Auriou or Liogier, but lacking that, I move to 150-grit sandpaper. I try to do as little sanding on a plane as possible, but this is one place where it's hard to avoid. I'm very careful about sanding right up to, but not over, the lines. I'll then follow the 150-grit with a few passes of 220-grit. 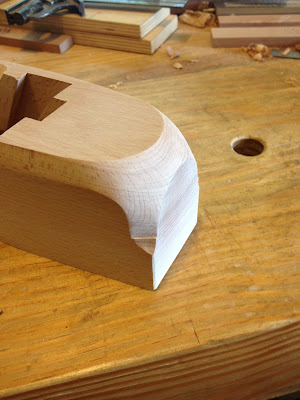 Add a coat of finish, and it's done! 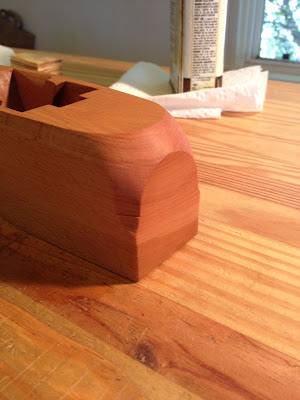 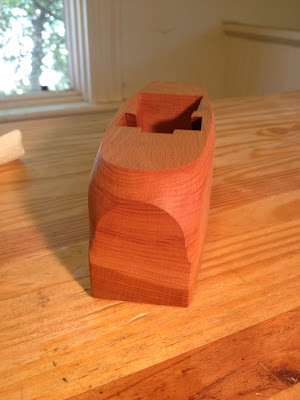