I made some more progress on the fore plane this week. I had a nice piece of quartersawn jatoba that I thought would make a nice handle. Jatoba is hard and heavy, quite coarse, but should hold up well. I cut a tenon on the blank, then traced out the pattern and drilled a couple large holes, with a forstner bit, to define the top and bottom of the cutout. 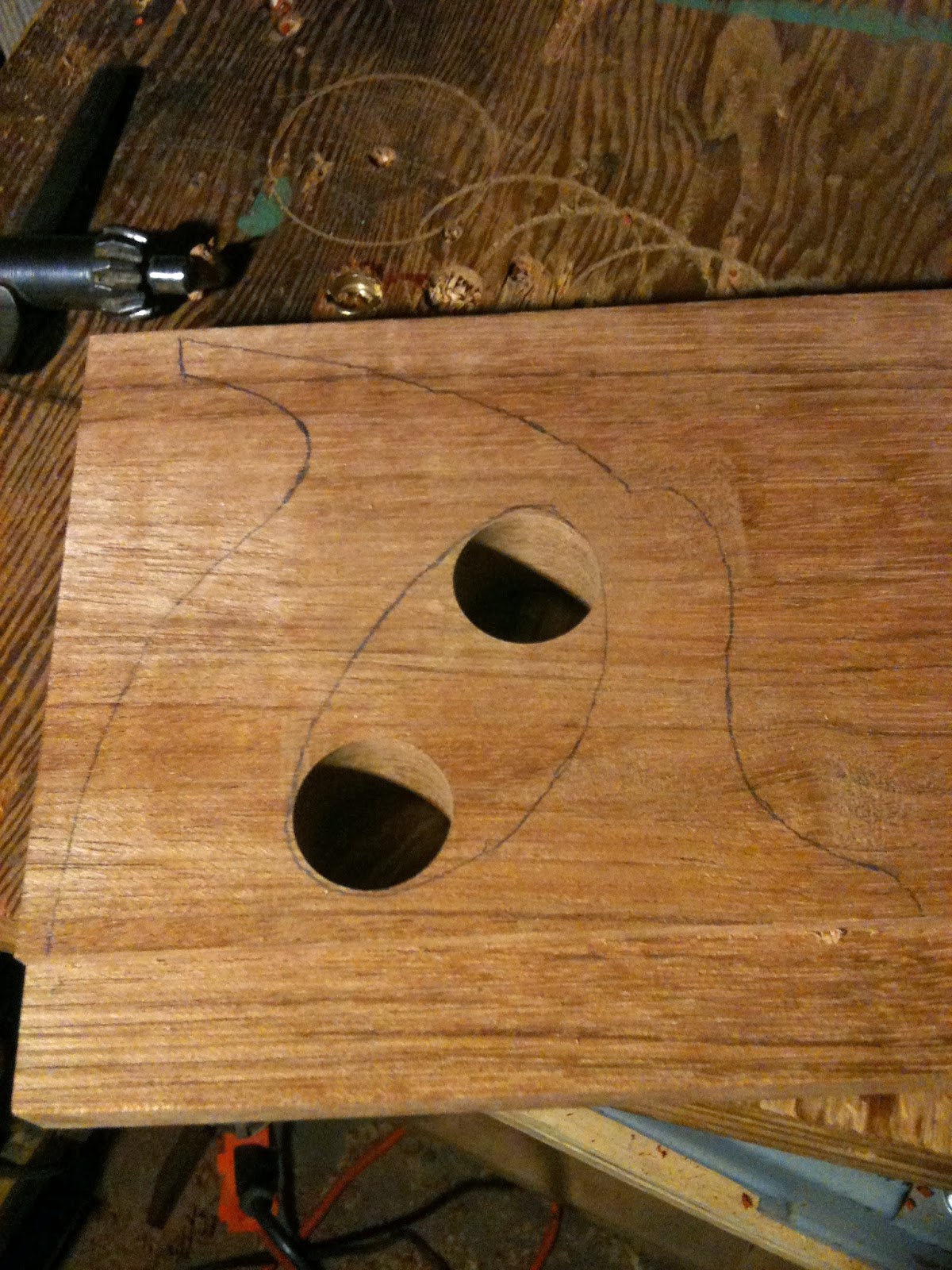 Then I cut to the lines with a coping saw, and refined the shape with a chisel, vixen files, rasps, and sandpaper. 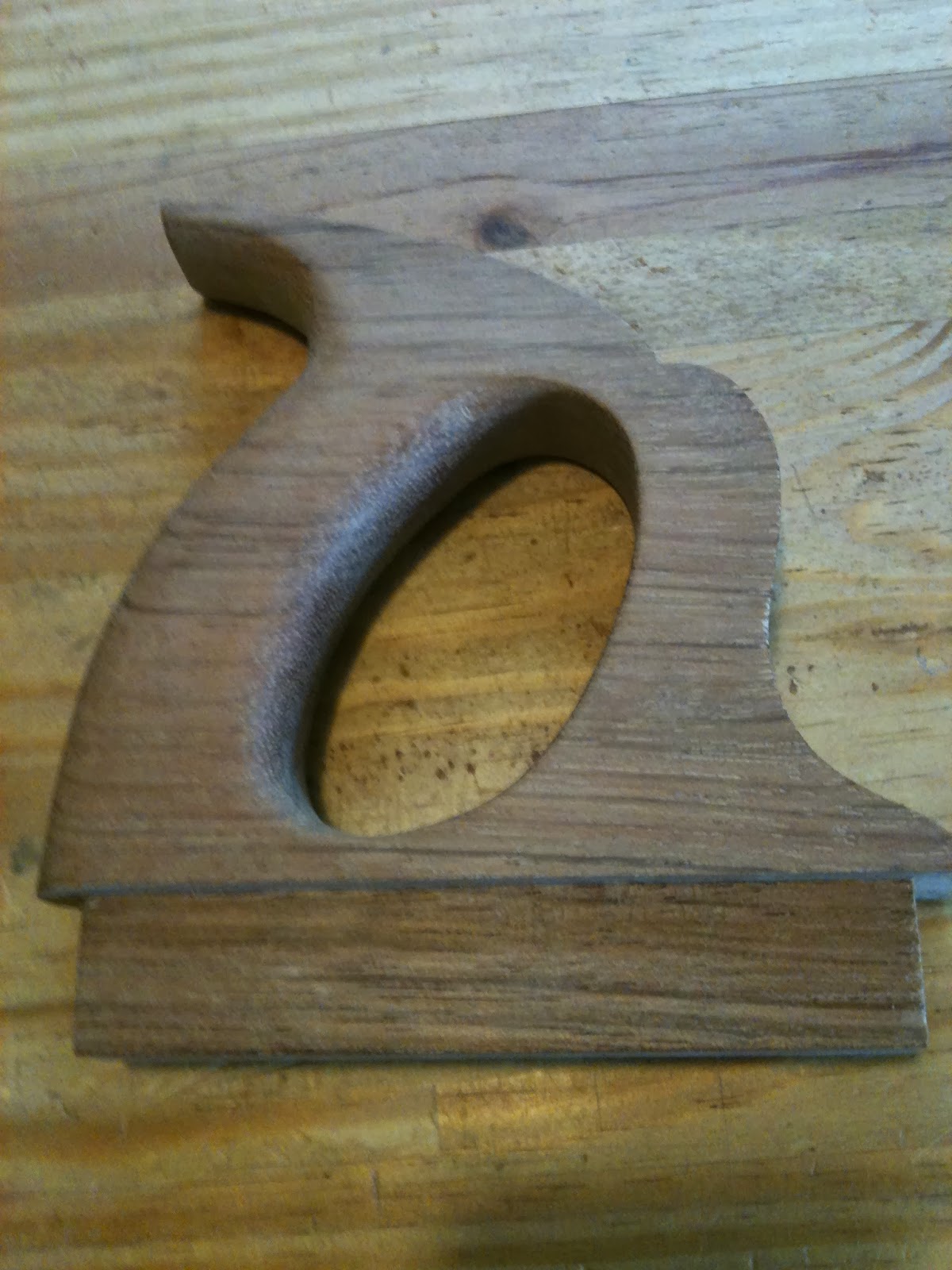 Then I turned to the wedge and iron. The iron is a turn of the century "A.C. Bartlett" that I bought on Ebay. I have never seen another quite like it. Double irons are fairly common on the bay, but single irons are quite rare.  This one needed quite a lot of work, flattening the back, but it turned out nicely.
The  wedge is a piece of tropical mystery wood that looks a lot like jatoba, but is more fine grained. 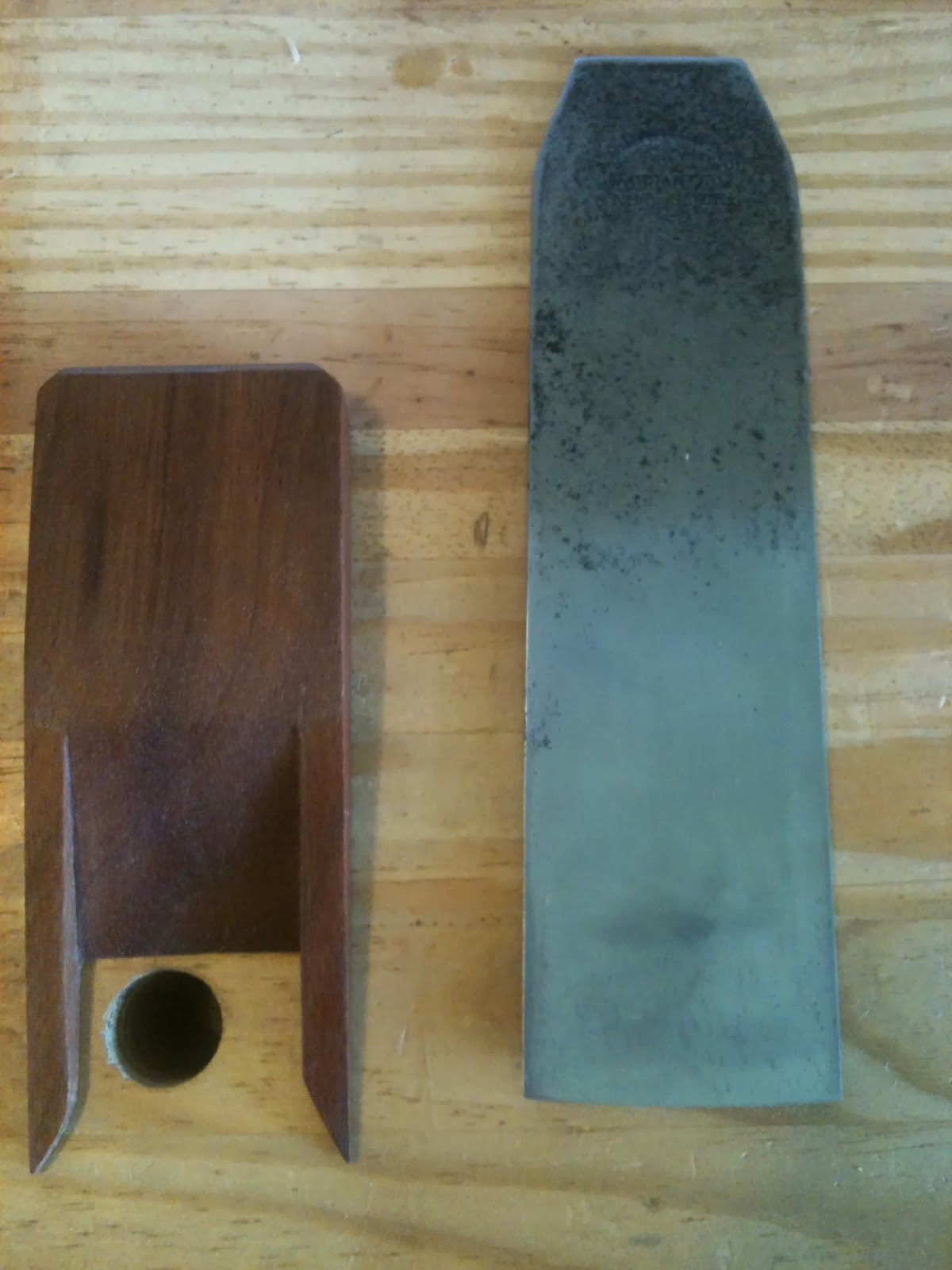 All that's left for next week is to glue in the handle and apply some finish!
Posted by Steve Voigt at 4:23 PM No comments:

Well, the woodworking has been on hiatus for a little while, but I've just started a new project.
For a long time, I've wanted to make a traditional, single iron fore plane. The fore plane was so named, according to Joseph Moxon (in his Mechanik Exercises of 1678), because it was used before other planes. In other words, a roughing plane, usually equipped with a cambered iron for taking heavy cuts.
By the 19th century, the fore plane had been superseded by the jack plane--a shorter, open-toted version of the fore. Today, most hand tool woodworkers use either a Stanley no.5 or no.6 as a jack/fore. These planes work, but have some limitations. The no. 5 is about the right weight, but its shorter length (14") makes it less than ideal for large surfaces. The no.6, at 18" is an improvement, but it's too heavy to use for long planing sessions. Both planes have open totes, which are prone to breaking, and both have chipbreakers. A chipbreaker (or cap iron, if you prefer), is a great thing to have on a finishing plane, but it's not necessary on a roughing plane. A single iron is a lot faster to pull out, sharpen, and get back to work.
So that's my ideal fore plane: as long as a no.6, but weighs as little as a no. 5, with a closed tote and a single iron.
Over the summer, I picked up a nice chunk of padauk, which should work nicely for this plane.
After laying out the lines for the mortise, I started by drilling out a whole bunch of holes to almost finished depth, to get rid of the waste. 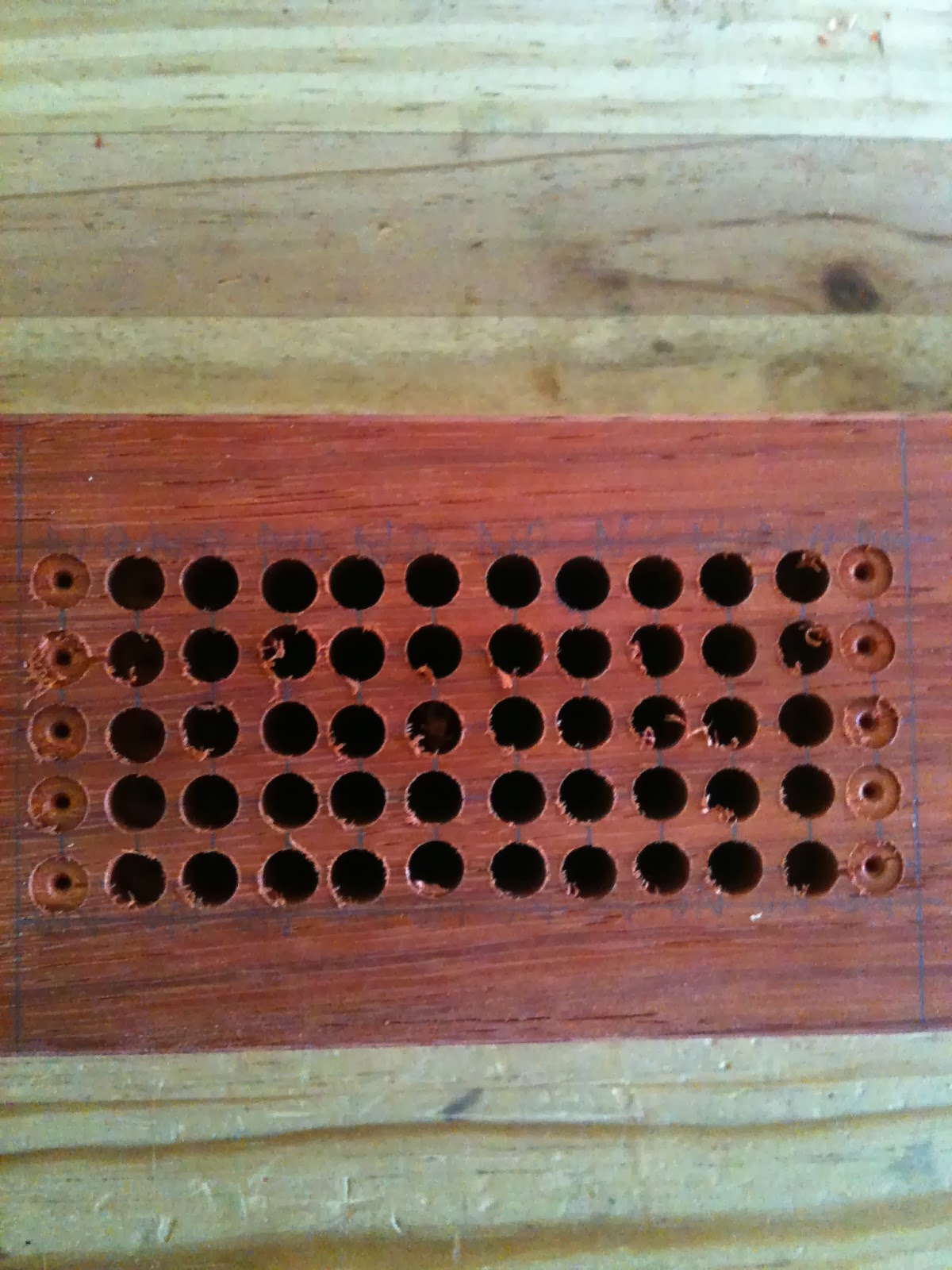 The next step was to make a guide for chiseling the bed and throat. This is very simple, just a block of wood with a 50° angle on one end (for the bed) and 60 ° on the other (for the throat), and a thin piece of scrap nailed on for a fence. After that, it was a pretty straight forward matter of breaking out most of the waste, then using the guide, moving it back gradually until I reached my layout lines. Here shot part way through the final cut on the bed: 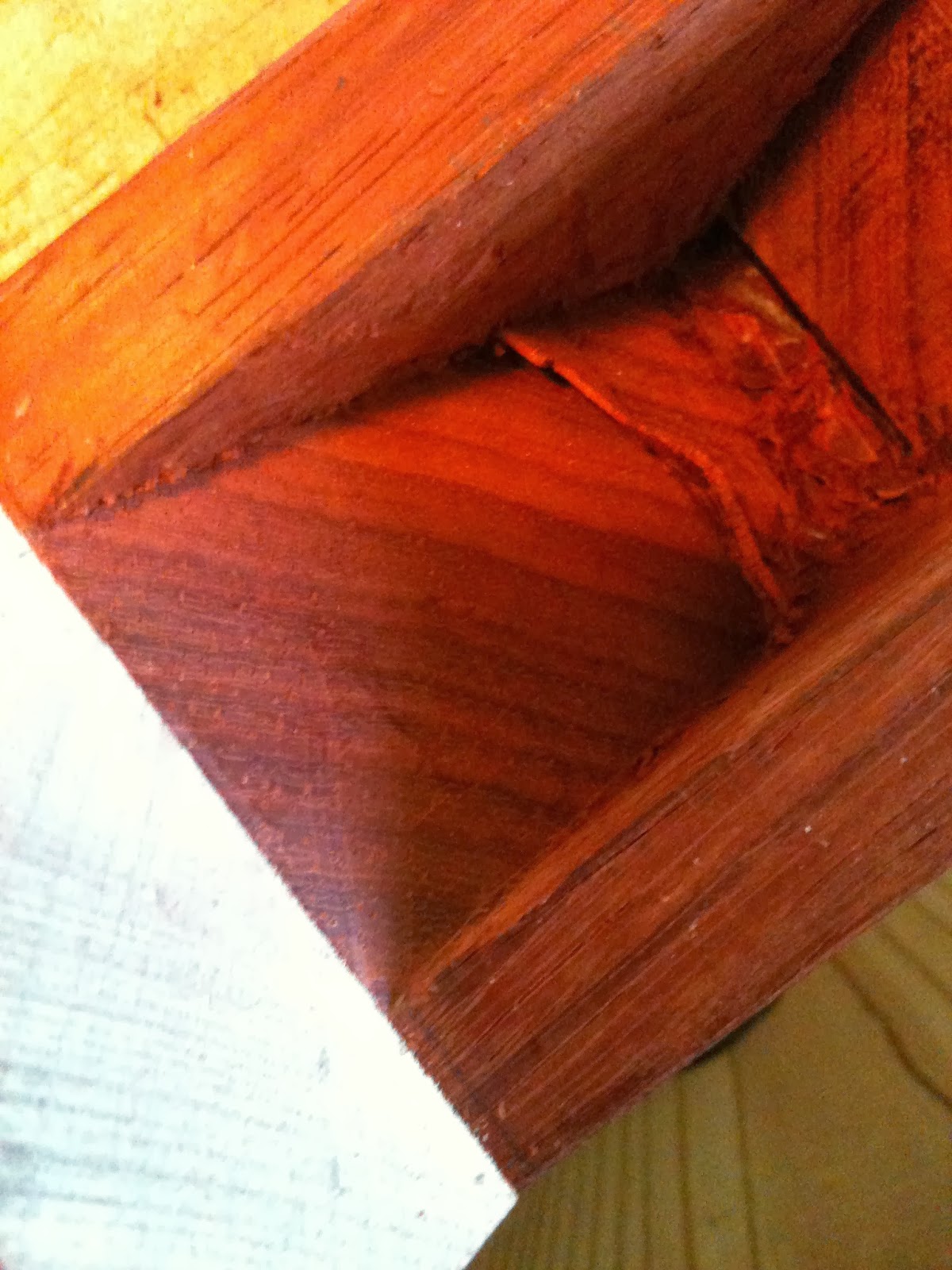 The next task was to make the saw cuts for the abutments. In the old days, planemakers used a specialized abutment saw--a thick, narrow saw kind of like a keyhole saw. Today, most people use a flush-cutting saw. I didn't have one, so I improvised. I had an old $5 drywall saw. These things are ugly, with very aggressive set and stamped teeth. I used sandpaper glued to a flat surface plate to grind the set completely off. Then I resharpened the teeth with 15° rake and 20° fleam. 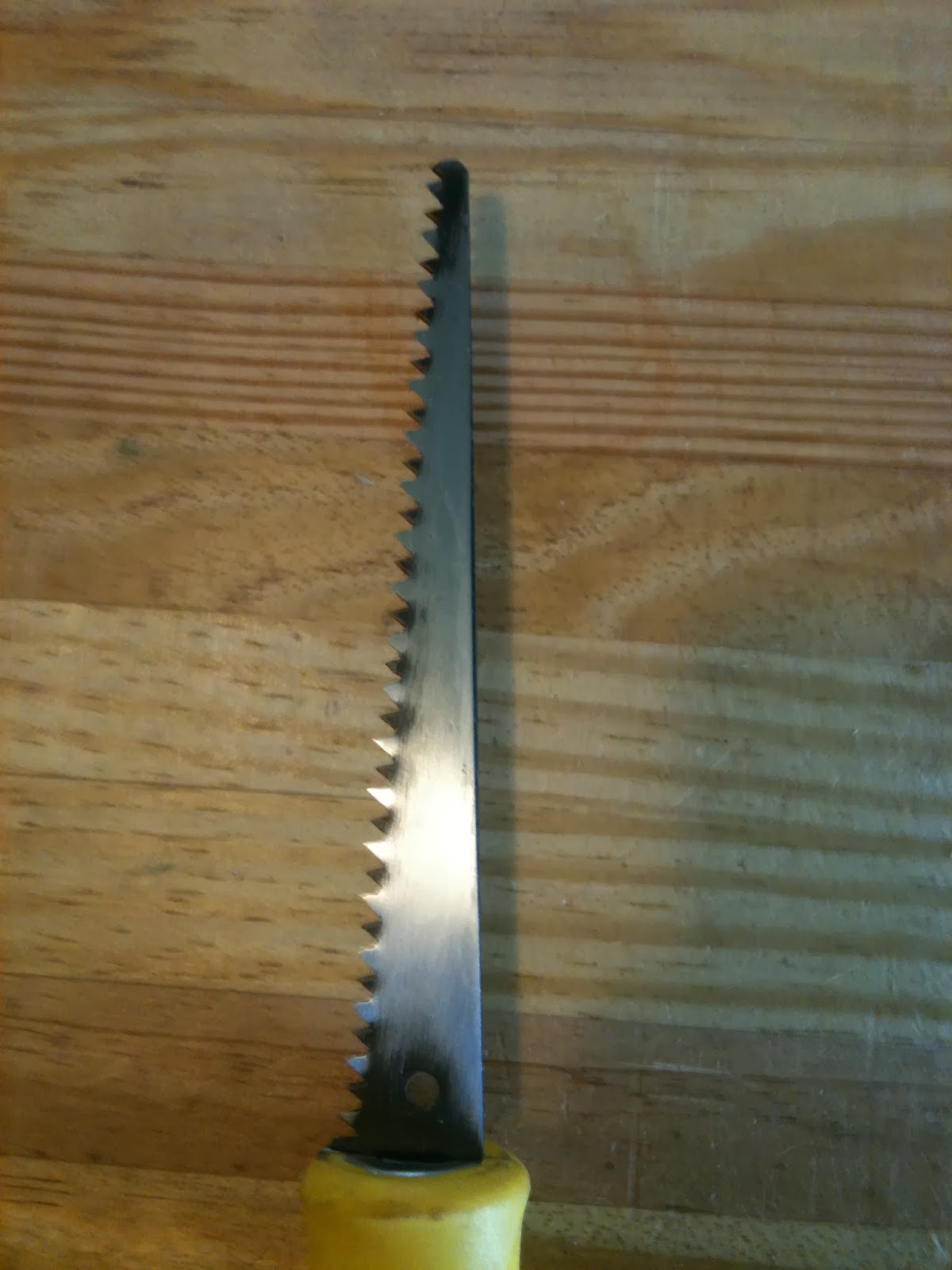 The repurposed saw cuts slowly (because the blade is quite thick--.065"), but leaves a very nice surface. Here's a shot part way through (I've knocked out the waste on the left side with a chisel): 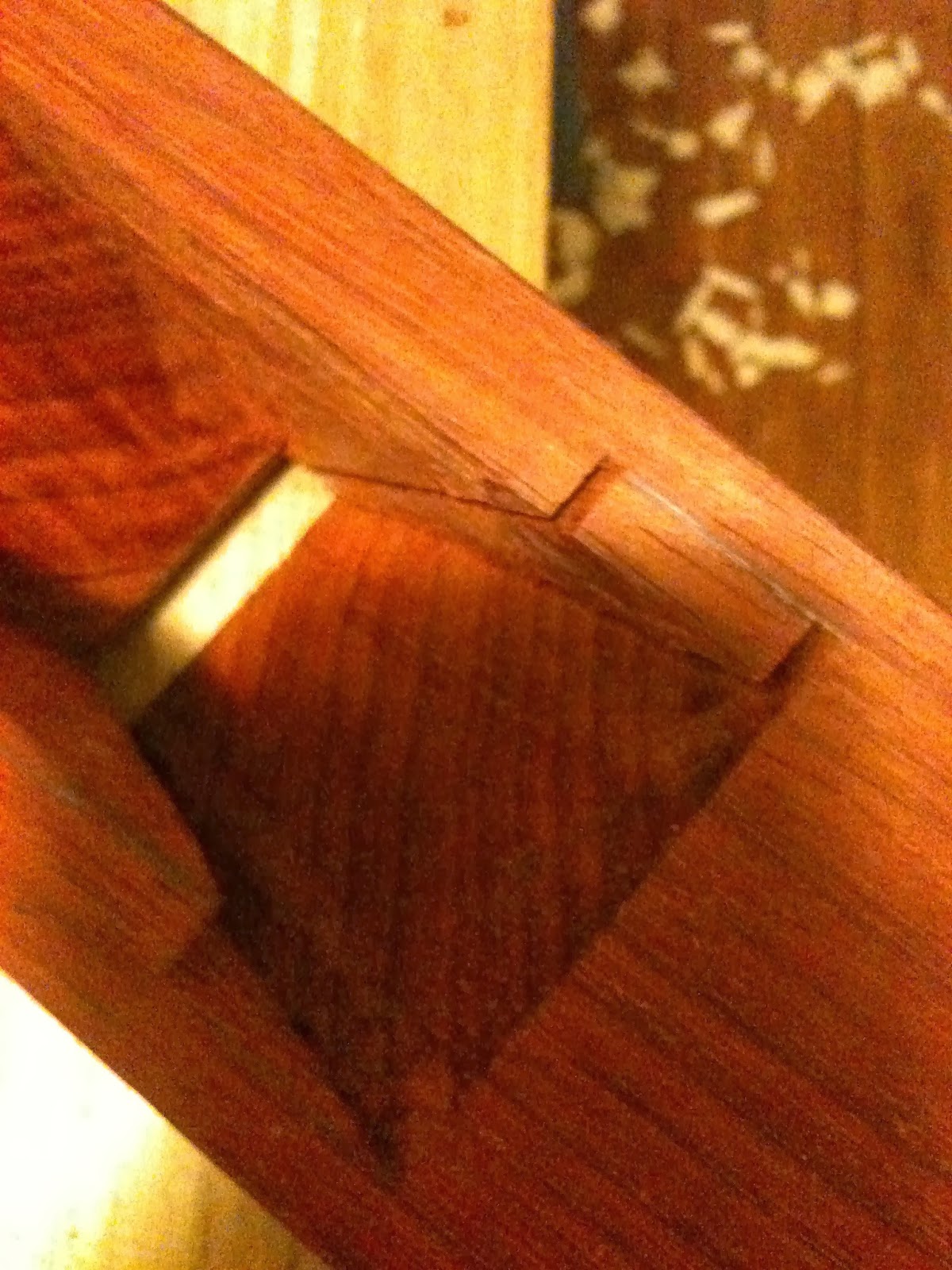 And here's a shot showing both abutments chiseled out. I'm using a piece of scrap wedged in the saw cut to protect the front of the throat while I use a chisel to the lines: 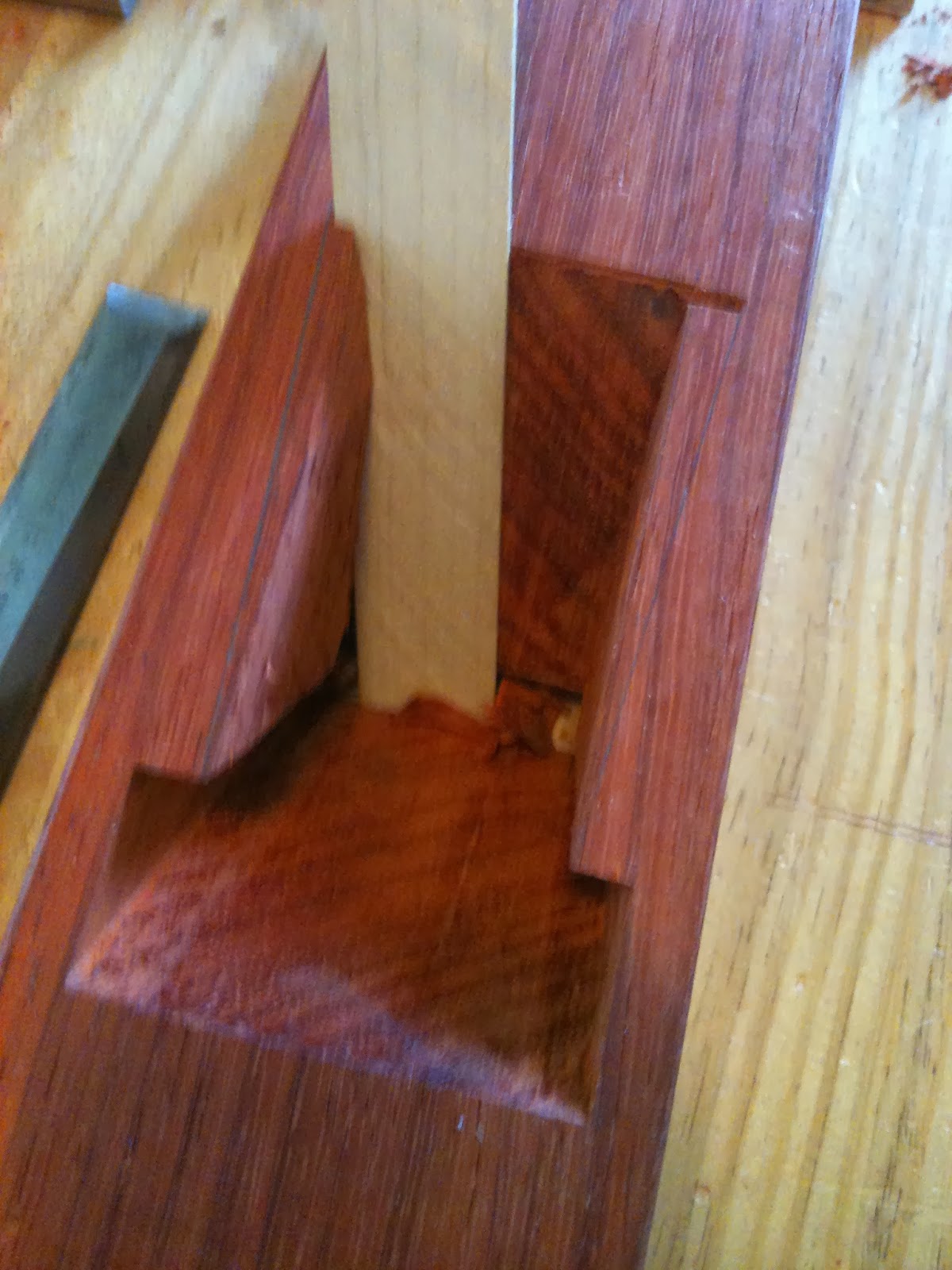 Here's a shot of the finished throat: 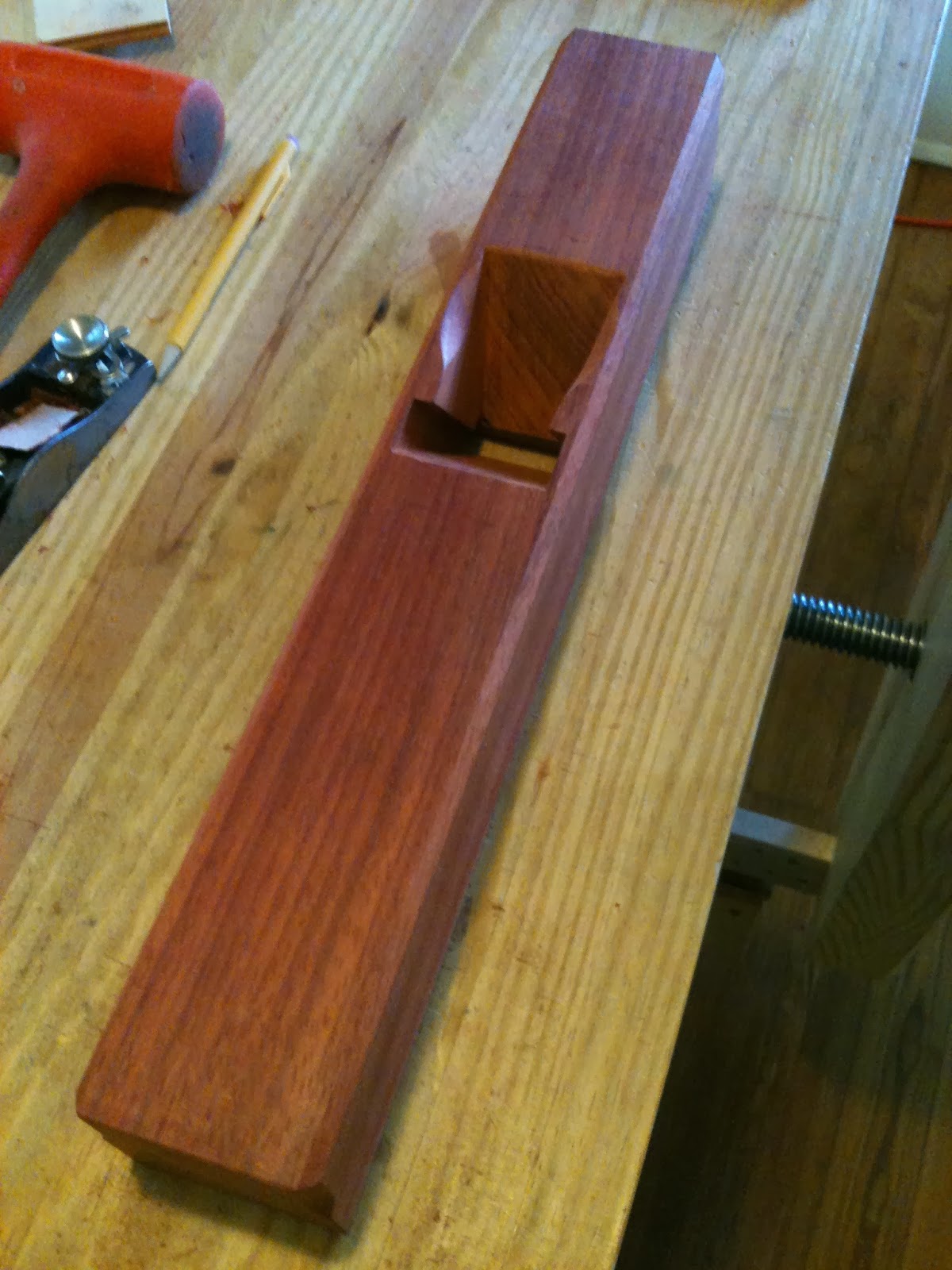 That's plenty for now. Next week, I'll take a crack at the handle and wedge.

Posted by Steve Voigt at 9:05 PM No comments: